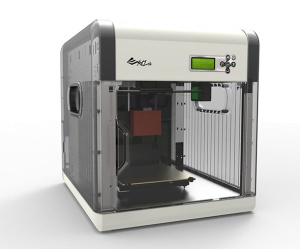 It arrived just last Friday and is now sitting in my lab space – where it has made a number of successful models.  At the price it is quite amazing!  It worked right out of the box.  So here are some pros and cons based on my limited exposure to using it:

Pros: Software is easy to install, firmware updates happen quickly with no reset buttons needing pressed.  8 x 8 x 8″ glass build platform is heated, and has self-leveling software too.  At some out of tolerance condition, the user is guided to adjust the bed thumbscrews, but the unit is well marked to warn you not to adjust the bed from the initial factory settings unless prompted.  Unit is fully enclosed – top door is sensed when open but the front door is not. Well lit inside for viewing.  There is a 4-line LCD and 6 button interface with a home button. The extruder has a park position with a nose wiper and “spit” bucket for excess filament. Loading filament is easy but you do have to push a bit at first to insure the pinch roller catches it.  The machine goes into an idle standby condition after several minutes, and this time can be set in the menu.  The machine is pretty quiet – far quieter than my 1st generation Cube.   And it appears that the machine will store the current job and does not need to remain connected to the computer.

Cons: The software has a spartan look about it, but all the essential features are there. Slicing is slow, but there are a lot more options than the 3D Systems Cube client.  Four different layer thicknesses can be chosen, and the 100 micron setting does really work.  Setting profiles can be named and saved for later recall.  Currently only ABS can be used, but supposedly PLA is on the way.  Proprietary 600g cartridges are used, but at the current price, they are very competitive and even cheaper than some brands of open reel filament. The machine appears to be a bit slower than the Cube 3d unit, but works smoothly. So is it worth $500?  Definitely – this would make a great addition to a school classroom and clearly would work well for someone with little or no experience in 3D printing.

I’ll update this post with more details as we get more time with the machine.

UPDATE: After two weeks of use, this machine is doing just fine.  There have been some incremental updates to the driver software such that things like infill are now more explained.  The latest firmware (1.1.I as of this writing) adds several useful menu items, such as moving the head to enable easy access to the drip box for cleaning it out.  The only weird thing is that it insists on purging the head above the build platform at the beginning of a job, requiring a manual removal of that stray filament – or it will be dragged into the build.  Why this is happening (when it is so easy to fix) is beyond me.  Why not do that at the drip box???  But once a job has started, I feel confident to leave it to completion.  And if you are patient, the builds easily pop of the glass plate once cooled down – no need for a scraper. Given that there have been a number of early improvements to both driver and firmware, I suspect both will continue to improve the machine’s capabilities with time.

Of course, there is some debate about the chipped cartridges.  Yes, there have been hacks posted… but probably the biggest issue at the moment is just the availability of the cartridges in the retail market.  At $28 for 600g of ABS, that translates to $46 for 1 kg, and although you can get ABS filament for perhaps $30 a kg, I’ve not been all that happy with my samples of the cheaper brands.  At $48/kg, Makerbot filament has been consistently good (at least in my machines) but obviously without hacking the EEPROM you can’t refill an empty unit.

How do the builds compare to other machines?  With careful choice of parameters, I’ve produced models almost as good as a $15,000 uPrint machine.  And, the DaVinci has a bigger build volume though it is a little slower.  It definitely beats my Solidoodle 2, but my Cube 2 can make better quality sidewalls.  This may be a belt tension issue so I’m going to investigate that soon.

By mid-summer the 2.0 dual nozzle unit should be on sale in the US (it is currently on preorder in Taiwan, and they will not ship outside that area).  The WiFi enabled, Android touch panel version comes out after that.  I suspect that this model is causing heartburn in more that a few places that were selling more hobbyist-style models. There is certainly a place for those – but not for someone who has limited interest in sweat equity technology.

UPDATE 2: Yes, the sidewall problems were indeed a loose X belt which was simply fixed with a procedure that is now shown on the support page for the printer.  And with that, the prints have been really consistent.  The purge behavior is still the same, even though I’m now on the “J” firmware version and several client software versions later.  The fix?  I put a piece of 2 mil Kapton tape on the right edge  of the build platform where it purges and that solved it.