Well today the Mini finally arrived.  Ordered back in late February, but given the problems of the 5th Generation Replicator, I was in no hurry.  I know I got a better engineered Smart Extruder module – one way to tell is if the module has a lot of thin fins in the cooling window (just compare to the pics on the marketing pages for the old style).

So I installed MakerBot Desktop 3.1.1 which supposedly has camera and WiFi support, along with the latest firmware for the Mini. Short answer – it doesn’t work.  Neither camera nor WiFi works for me and there is no clear explanation.  I use WPA2 personal on my router – the WiFi setup procedure seems to work (it sees several WiFi routers in the vicinity), I enter the correct password (no error message after that) but it never shows up on my client list.  And as for the camera, nothing there as well.

Auto levelling seems to work – but there appears to be a low spot on the right front of the build plate, as even the PLA raft doesn’t stick to it but warps (gosh, it takes a lot to get warped PLA on blue painters’ tape).  Something to investigate or maybe send in a support ticket.

So my first impression?  This is still a work in progress as far as the software goes, and perhaps some details of the hardware too. Sorry to say my XYZ Printing DaVinci 1.0 works better at this point and at 40% of the cost.

UPDATE:  After two firmware updates and one MakerBot Desktop update, I now have a fully functional Mini.  And WiFi and remote monitoring now work too.  Still, while I like the package, I think the overall price/performance is not great.  Why?

Rafts:  love them, hate them, you can’t turn them off.  Or at least not without hacking into the software.  Thing is, some parts just don’t need a raft – and PLA sticks well to blue painters tape.  Which, in my case, has to be two layers thick or my prints (raft included) warp off of the front of the build plate.

Layer height:  200 microns and higher (if you like), but no less.  Gosh, this makes small parts.  Smaller layer resolution would be nice.

Noise:  if you are in the same floor as the Mini in my house you know it is working.  And the second floor…

BTW the camera is practically worthless – it is more like a slow security cam feed – once every 8 seconds or so it refreshes.

I have made some quite acceptable parts despite these shortcomings.  However, the competition is at MakerBot’s heels and if they are going to survive they need to ramp up the QC (no more unwitting customer beta testing) and features/price point to make me stay with them.

As summer approaches here in the US, two machines that were announced at the Winter CES event are now available.  The MakerBot Mini began shipping two weeks ago, and 3D Systems’ Cube 3 was set for late June deliveries with preorders now.  The third generation Cube claims a layer resolution of 75 microns (.003″) and prints in ABS or PLA in two materials / colors at once.   The exciting thing about this machine is the new filament delivery system, with nozzles attached to the print cartridges.  The price of the cartridges is the same as the previous Cube 2 model, but it isn’t clear if they contain the same amount of filament as before.  WiFi remote is still included but now there will be an iOS and Android control app too.

I plan on posting my personal experiences with both of these machines in early July.  The Mini uses PLA only, but you can source your own filament.  The Cube requires proprietary cartridges, but the cartridges come in PLA or ABS with more color choices.  A departure from the previous generation Cubes is that this unit changes to a Bowden-style remote extruder motor that drives the filament using an internal mechanism in the center of the new cartridge.

However, the next wave of personal 3D printers will be those using liquid photopolymers.  And again, capabilities are expanding while prices are going down.  A commercial SLA machine I know currently costs $10,000.  The build envelope is 4 x 3 x 4″.  It does not have WiFi or an internal buffer, thus it has to be in communication with a computer at all times while printing through a USB connection.  But this week, XYZ Printing announced the Nobel 1.0, to be sold for under $2500 at the end of 2014.  Here is a quote from their press release:

“Using stereolithography technology, also known as optical fabrication or photo-solidification, the print resolution of Nobel 1.0 reaches 25 microns. By improving the resin-filling mechanism, Nobel 1.0 provides a stable SLA printing quality so that users do not need to add liquid resin constantly throughout the printing process. Slightly larger
than other desktop SLA printers, the build size of Nobel 1.0 is 5 by 5 by 7.9 inches. It is expected to hit the market in 2014 Q4 at the price level of $2500 or less, making Nobel 1.0 the most affordable desktop SLA 3D printer on the market. Targeting users that are more concerned in printing quality, Nobel 1.0 works perfectly for jewelry designers, dentists, and industries that require rapid molding processes.” 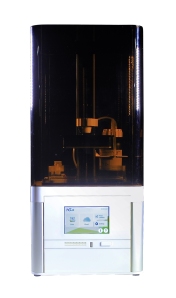 While this technology is amazing for smaller, precision parts (like the applications mentioned above) there are downsides.  The photopolymer liquid is hazardous before it is cured, and skin contact is to be avoided at all costs.  The materials have shelf lives of perhaps a year.  Unused material must be disposed of properly – I have resorted to small disposable trays put out on a sunny day to cure.  Models must be cleaned with isopropyl alcohol to remove any remaining liquid, and depending on several factors, might need additional curing with UV light.  Also, this material is eventually degraded by exposure to sunlight, and generally has lower strength and heat deflection temperatures than ABS or PLA.  Supports are made of the same photopolymer, and thus are “breakaway” needing cleanup and removal.

I’ve amazed some of my students by taking a small cup of photopolymer and “drawing” in it with a blu-ray laser pointer.  I pour away the remaining liquid, leaving a “solid doodle” that recorded the light’s movement in the cup.  Yes, this stuff cures that fast.  In fact, heat is generated during the curing process, making for a small risk of fire if you get a large quantity in contact with some catalytic agent – so my advice is never use metal objects with these materials while liquid.