Looks like early July for some new reviews on 3D printers, most specifically the Revolution  from QU-BD.COM, the PiMaker and the 3D Systems Cube.  The Revolution should be delivered to me before the end of June, the PiMaker kit is being delivered shortly, and I’ve had the 3D Systems Cube for 9 months (but no time to really go into a full article on it).

UPDATE:  OK, July came and went, and like the promises of a lot of crowd funded projects, they don’t get fulfilled.  So as of early September, I’m still waiting on my QU-BD Revolution machine, despite being one of the first 10 in January of this year to order one.  Soon, so I’m told…yet other orders have gone out that were placed after mine was, and nobody there seems willing to commit to a ship date and my emails are ignored.  Not a good way to build a business for the long term where there is a lot of competition and more buyers expecting the vendor to be responsive to customer needs (Update: RXL received in late October and I will get something out soon on this unit). 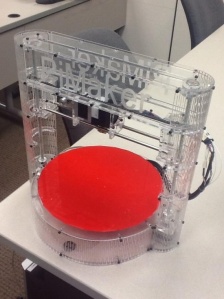 As for the PiMaker, I did receive that in late July and got the main chassis work done, despite having very limited documentation at the time (almost none, really).  So, I decided to give it a few months to sort out the details, and that has proven to be useful.  And, somehow I totally forgot that I ordered a makibox (www.makibox.com) kit back in April (that was a busy month) and that is expected late September or early October (Update:  shipping started in December 2013 but mine is still in the queue).  Then, slated for February 2014 is the Buccaneer 3D printer from Kickstarter (Update: this has been delayed to April 2014).

I did get my linear bearing and aluminum platform updates installed in the Solidoodle 2d generation unit, and that made a world of difference.  It is so quiet and smooth that it is hard to believe it is the same unit.

So once the backlog of reviews gets posted, you’ll have a lot to read and comment on.  I promise! 🙂

This site uses Akismet to reduce spam. Learn how your comment data is processed.