After months past the promised delivery date, my Kickstarter edition of the Robox from CEL arrived this week.  Oh wow, what a nice package and level of build! However, my excitement quickly turned to frustration, and now I have what is a cool looking paperweight that has never made a single part.

What is wrong?  The machine failed to load and purge filament.  The cause?  The head with its motor that flips nozzles and valves from side to side is dead, or perhaps the drive electronics behind it. It heats up, fan runs, lights come on, etc. but there is no extrusion. There is filament to the head.  I’m currently waiting for a response but as it is the weekend already in the UK I don’t expect any help until next week. Will update this if things change, but for now, I’m just using it as a nicely lit (programmable color) paperweight! 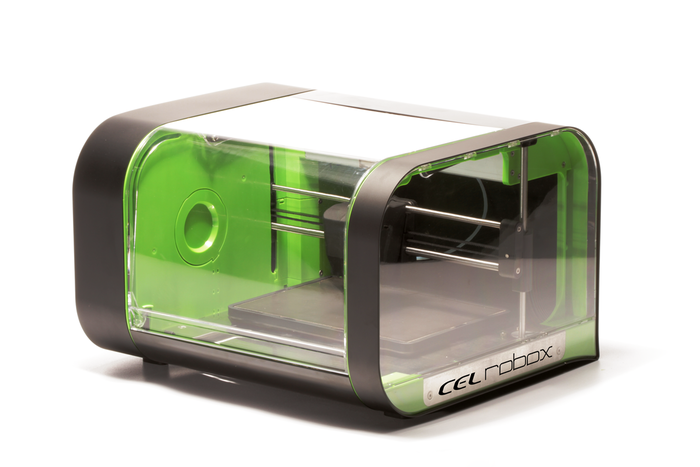 Until more of these are out with users and properly evaluated, I’d avoid purchasing one of these.  At $1400 US plus shipping (post-Kickstarter price) you want something that works first time out of the box. I know one of the Beta testers – he is still waiting over a month for parts to repair his machine.  Again, another problem with the head.  My immediate impression is that this head design will be a challenge to keep working in the long term. So until this is resolved, my CEL-Robox is really a CEL-Robrick…

UPDATE: support finally answered back after the weekend, but it has been slow going.  I’ve been running a lot of diagnostics that don’t solve the (obvious) problem of no extrusion – a failed nozzle shuttle motor  and/or electronics.  I’ve suggested sending back the head for a factory inspection – if it is good (it most probably is not) then a replacement or fix at that end will solve this.   If on the off chance it is working with one of their machines, then I’ve got some more detective work to do with the main box.  But at least we will have the problem isolated by 50%!

UPDATE #2: Sent the head back by air mail to the UK and I’m now waiting for the head to be returned – they quickly checked it on one of their machines and it worked. So the culprit in this case was not the head, but my worry now is that the main board is at fault.  They are sending me some replacement head cables in the hopes that this is the problem.  Despite making some rather close inspection of that part of the system, including the connectors at the head shell itself, still this indicates that the problem is with the machine.   While I’m pleased with the level of response from their support team, I’m only a little closer to getting this to work.  And since I never got any error messages or clues from the system, I’m probably going to go to low-level continuity checks of the wiring to the head to get a resolution.  I have already invested 20 hours of debugging time with more to come.  I sure would like to get this thing to print!

UPDATE #3:  The head is back and they sent spare head cables in case something was wrong with the original parts.  So I refitted the head and powered it up – connecting the box to my computer again.  Of course the first thing I wanted to do was test the head nozzle shift – and I hit the button for a nozzle change and AMAZING — it worked!  Thing is, I had never seen this movement before in response to the nozzle change commands.  And I didn’t do anything to the electronics before this was returned, other than a firmware update that came while the head was in transit.  OK, so it is now on to giving this a try for building a part!

UPDATE #4: One more problem – I calibrated the nozzle height according to the instructions, but the head is still too low when it starts a job.  The result is a smeared first layer and occasional grinding noises (from filament getting jammed).  I’ve opened a support ticket.  I’ve not been able to make a single successful print on this machine yet, so despite what appears to be a well-engineered machine, I’m still unable to use it.  Sadly, this failure came during a somewhat public demonstration at my college, so it wasn’t a good sell for the product.

2 thoughts on “CEL-Robox – Frustrating out of the box – But now much improved!”

This site uses Akismet to reduce spam. Learn how your comment data is processed.